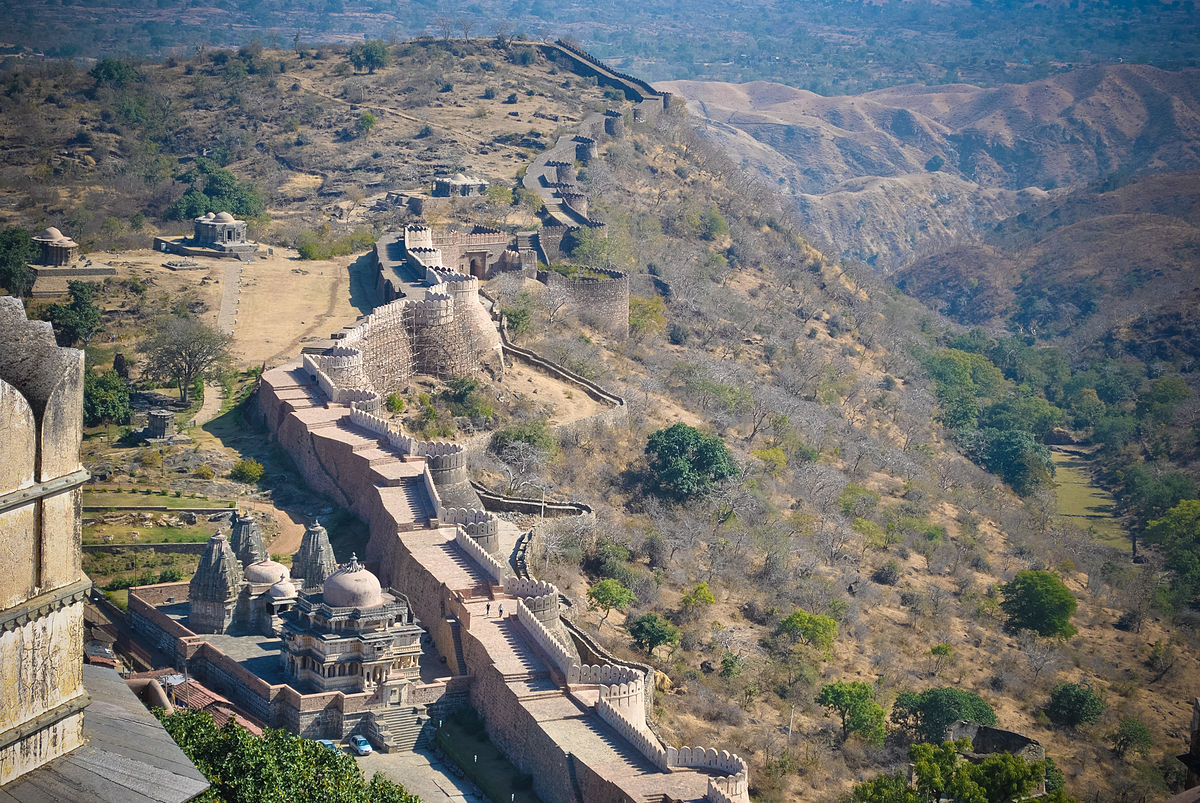 Kumbhalgarh is one of the most splendid fortresses in Rajasthan and the second most crucial fort after Chittorgarh in the Mewar region.

This unquenchable fortress is guarded under the protection of the Aravali mountains.

It was constructed in the Aravali Ranges during 1443-1458 AD, (15th century AD) by Rana Kumbha and hence takes its name from the same.

The fort has also been designated a UNESCO World Heritage Site as one of the Rajasthan Hill Forts group.

The fort is also considered to be Maharana Pratap’s birthplace.

Curled up on the western hills of Aravali Ranges, the fort was established by Rana Kumbha in the 15th century A. Kumbhalgarh in its present structure was constructed by Rana Kumbha who was the Rana of Mewar from the Sisodia Rajput family.

Rana Kumbha took the guide of the celebrated architect of the period, “Madan”. Rana Kumbha’s realm of Mewar extended from Ranthambore to Gwalior and occupied huge expanses of what is currently Madhya Pradesh and Rajasthan.

Rana Kumbha is also said to have established 32 out of the 84 forts in his jurisdiction, of which Kumbhalgarh is the greatest and most intricate.

In 1457, Ahmed Shah I of Gujarat attacked the fortress but found the attempt unsuccessful. There was even a popular belief that is was guarded by the Banmata deity in the fort and thus he demolished the temple.

Further attempts were made by Mahmud Khalji in 1458-59 and 1467, and they also ultimately failed. In 1576, Akbar’s general, Shahbaz Khan, was thought to have taken charge of the fort. But Maharana Pratap recaptured it in 1585.

An armed group of Sannyasins assembled a battalion in 1818 to safeguard the fort, but Tod persuaded them all, and indeed the fort was seized over by the British and later restored back to the state of Udaipur.

There were improvements made regarding designs of the fort, by the Maharanas of Mewar, but the original structure designed by Maharana Kumbha remained the same.

The aloof geographical location of the fort provided the fort with a sense of unconquerability. In times of turmoil, it served the leaders of Mewar as a shelter.

The place being the birthplace of Maharana Pratap is of extreme significant value for the residents.

In times of turmoil, it served the leaders of Mewar as a refuge.
It also acted as a shelter for King Udai of Mewar as Banbir killed Vikramaditya and overtook the throne. To survive a prolonged invasion, the fort is self-contained in all aspects.

The combined strength of the Mughal and Amber could invade their defences just once, mainly due to the extreme scarcity of drinking water.

There is a splendid collection of Mauryas-built temples, the most breathtakingly beautiful of which is the Badal Mahal or the Cloud Palace. The fort also gives the surroundings a beautiful panoramic view. The giant wall of the fort extends about 36 kilometres. In the 19th century, Maharana Fateh Singh renovated the fort.

The wide compound of the fort has ruins that are very fascinating and a stroll around it can be very informative.

Established on the Aravalli range on the top of a hill and protected by thirteen elevated mountain ranges is constructed about 1,914 meters above the sea level on the uppermost craters.

The Kumbhalgarh Fort has a palisade wall that stretches 36 km (22 mi), making it one of the world’s longest walls. The mighty fort that surrounds the Udaipur city is 3600 feet tall and 38km long. The front walls are 15 feet high. Kumbhalgarh has seven gateways that are reinforced. Inside the fort, there are over 360 temples, 300 ancient Jain and the rest Hindu.

The fort’s fortresses stretch up to a length of 36 kilometres, and this fact has rendered the fort feature in global charts.

It is claimed to be the world’s second-longest wall, the first one being ” the Great Wall of China “. There have been numerous palaces, temples, and gardens in the vast compound of the Fort, making it more magnificent.

From the top of the palace, it is possible to see the Aravalli Range for miles. You can see the sand dunes of the Thar Desert from the walls of the fort.

A few kilometres before your journey to Kumbhalgarh Fort, you will find yourself on a spiral road passing through rugged cliffs and lush forests. This will take you to Ariat Pol, where the watchtower can be found.

There are seven huge gates in the invincible Fort, seven fortifications folded along with crafted walls hardened by curved pinnacles and massive watchtowers. To date, the solid structure and stable foundation of the Fort have rendered it unsurpassable.

YOU MAY ALSO LIKE: The History Of The Konark Sun Temple

The bulky walls of the fort are wide enough to stand eight horses next to each other. Inside the complex of the Fort, there are no less than 360 temples. Among all of them, the Shiva Temple, containing a colossal Shivalinga, is worth visiting.