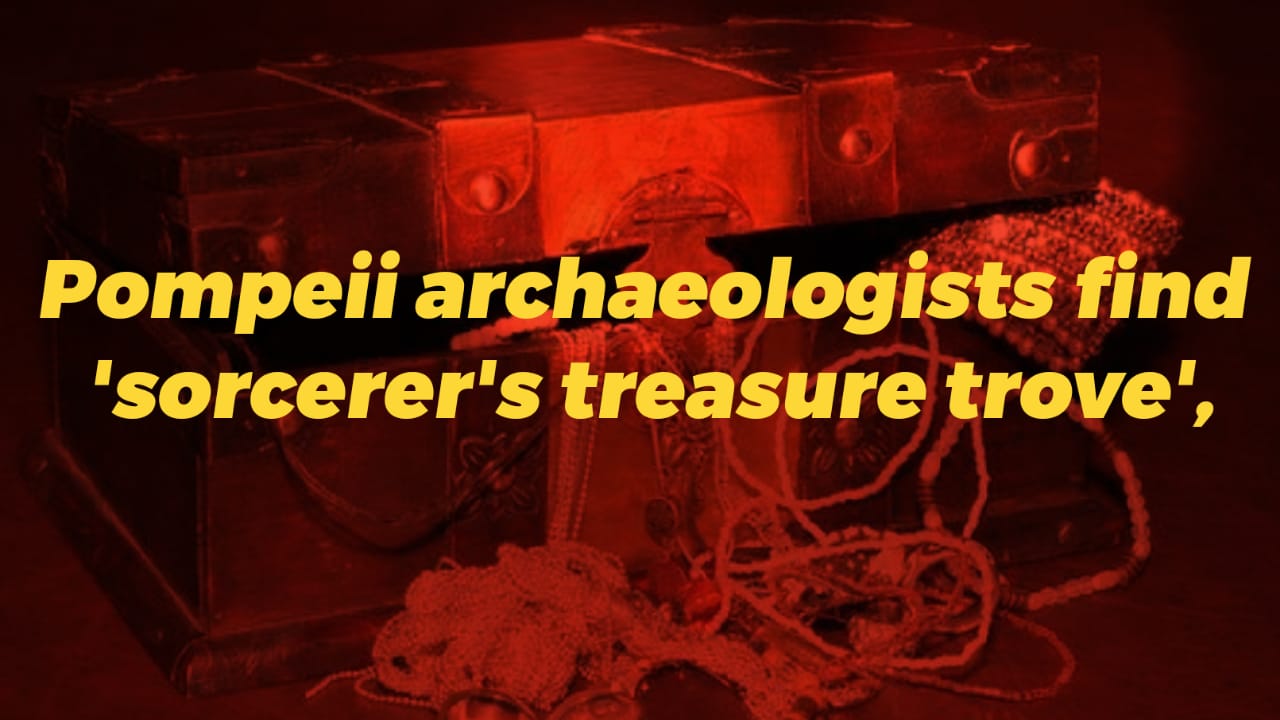 Archaeologists discover a sorcerer’s treasure trove of artifacts in Pompeii, dating back to 79 A.D

Archaeological discoveries at Pompeii have found a hidden treasure of artifacts in past years, amongst many others dated back to 79 A.D. of Mount Vesuvius Explosion.

The sorcerer’s treasure trove of objects, included charms of good luck, mirrors, glass beads, crystals, ceramics, amethysts, and amber, scarabs, and assorted gems, including a red-semi-precious stone with an engraving of an artist and a glass bead etched with the head of Dionysus, the Roman god of wine, and fertility.

Archaeologists researching in the Garden House recently discovered the hinges of a wooden box with artifacts in the Ancient Roman city of Pompeii. The artifacts probably belonged to a Roman sorceress, say officials at the Pompeii Archaeological Park.

It has been revealed that within what remained of a wooden box, some of its contents were still there being concealed by the ash which covered the city after the Mount Vesuvius volcanic eruption in Pompeii that occurred in the summer of A.D. 79, 2,000 years ago.

With time, the catastrophic explosion engulfed the city and its inhabitants, rendering it a rich archaeological site.

Many residents in Pompeii were killed by a massive cloud of gas, dust and debris, called a pyroclastic flow, rather than by slow-moving molten lava.

The clouds erupted over the area, killing its inhabitants wherever they were, burying and preserving them in ash.

The sorcerer’s treasure trove of objects, included charms of good luck, mirrors, glass beads, crystals, ceramics, amethysts, and amber, scarabs, and assorted gems, including a red-semi-precious stone with an engraving of an artist and a glass bead etched with the head of Dionysus, the Roman god of wine, and fertility.

Massimo Osanna, director general of the Archaeological Park of Pompeii, said in a public statement—”These are remarkable things from women’s daily lives as they tell memories of residents who may have evacuated in such a hurry that they left many of their belongings behind trying to flee the volcanic eruption that destroyed the area.”

On scrutinizing the artifacts, Osanna informed the Italian media outlet Ansa that it was much more likely that perhaps the artifacts belonged to a servant or a slave, instead of just the owner of the property.

Neither of the artifacts was made of gold, which was usually much preferred by the wealthy class of Pompeii.

The fascinating artifacts could have belonged to a female sorcerer who may have used them for fertility and good luck during rituals, Osanna said.

In order to better understand their significance, the scientists said they aim to examine the numerous ornaments, including those shaped like an ear, a clenched fist, a skull, a tiny penis, a scarab, and the one in the figure of Harpocrates, the Greek god of silence, secrets, and confidentiality.

Now, scientists reportedly said they’re still trying to establish the relationship between the items and the corpses of 10 victims, mostly women, and children via DNA analysis, recovered in a room in the very same building.

YOU MAY ALSO LIKE: The world oldest unsealed bottle of wine remains sealed since the 4th century

The treasures were unearthed in the House of the Garden in Region V of the park and are the same area whereby an inscription was discovered that led historians to conclude that the Mount Vesuvius eruption took place two months later than they originally thought.