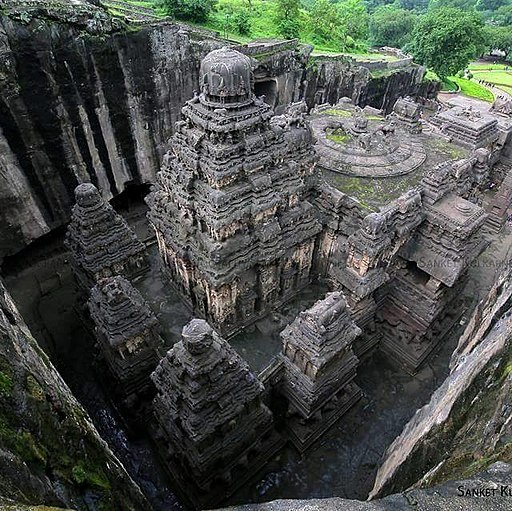 The magnificent structure was carved by skilled craftsmen from a single piece of solid rock in a cave on a mountainside. It took more than two decades to construct the entire building.

Generation after generation of people is always fascinated by the architecture of the Ancient world.

Whether it’s the Pyramids of Egypt, the magnificent examples of Roman architecture, or the splendor of the Oriental Temples, these structures tend to marvel at the dynamism of nature and construction. The Kailasa Temple in Ellora, India, is one such example.

Kailasa is one of the Caves of Ellora in Maharashtra, India. In Marathi tradition, it is said that the temple was established by an architect known as Kokasa for the Rashtrakuta Queen Manikeshwara, known for its spectacular size and exquisite artwork.

The temple was worked as a commemoration of Mount Kailash, which is the epitome of the God Shiva, as per Hindu scriptures.

Ellora’s Kailasa temple is known to be amongst the world’s most spectacular rock-cut landmarks.

Carved from a single, colossal rock face, the sheer size and architectural design of the temple are breathtaking.

But there is another explanation of why this temple is a world-class marvel. More than 1,200 years ago, it was vertically cut into the rugged basalt of the Sahyadri Hills with minimal more than hammers and chisels.

The nearest we have to an understanding is the 10th century legend of Katha Kalpa Taru, which relates to the Rashtrakuta ruler’s wife of the 8th century, Elu.

The king got sick, according to folklore, and his wife prayed for a cure. She vowed to refrain from eating until a magnificent temple was established for Lord Shiva if her wish was granted.

Her wish was granted and the king instructed the best architects in the world to submit their designs to build a great temple dedicated to Lord Shiva.

The temple has a U-shape and is around 150 feet down. Kailasa Temple is three floors up.

Pretty much every last trace of the inside structure contains an elaborate carving.

Towards the top, you see carvings of elephants that point your way down.

The construction is estimated to have included the excavation of more than 200,000 tons of rock over a twenty-year time span.

Architects began from the highest point of the mountain and worked downwards to cut the structure.

The meticulous process destroyed as much as 200,000 tons of rock formations somewhere in the range of 757 and 783 A.D., as per archeologists. Kailasa Temple is one of 34 carves in the city carved from solid rock.

In current terms, it would require around 200 days, to excavate the whole site using modern technologies, operating 24 hours a day except for the intricate carvings over the monolithic structure.

As carvings, columns, and sculptures, each inch of the temple is embellished with splendid craftsmanship, chiseled out from the very stone that shapes the temple’s architectural base.

Various stories from Hindu mythology are reflected in the carvings. In the temple, you can also discover a sculpture of Nandi, the sacred bull which is a tradition seen in all temples devoted to Lord Shiva, and a Shiva Linga, the emblematic picture of Lord Shiva.

Both this structure and the structure comprising the primary deity are 7 meters high and is built on two floors.

There are 16 pillars supporting the key mandapa (hall). A mandapa for Shiva’s vehicle, Nandi, the bull, is in front of it and linked by a bridge. A pillar or dwajastambams, 45 feet tall, stands on either side.

Trisula (tridents) is mounted on these columns. In the temple complex, there are five detached temples, three of them dedicated to the Ganga, Yamuna, and Saraswati river deities.

An interesting aspect of the temple is that elephant carvings are made in such a way that they give the impression that they are holding the whole temple on their backs.

These were made from the same rock as the temple itself as well.

YOU MAY ALSO LIKE: Archaeologists discover a sorcerer’s treasure trove of artifacts in Pompeii, dating back to 79 A.D

It also portrays numerous tales from the two Hindu epics, the Ramayana and the Mahabharata, including a portrayal of Mount Kailash attempting to raise the demon king Ravana. Among the carvings, Lord Vishnu’s numerous avatars are also depicted.