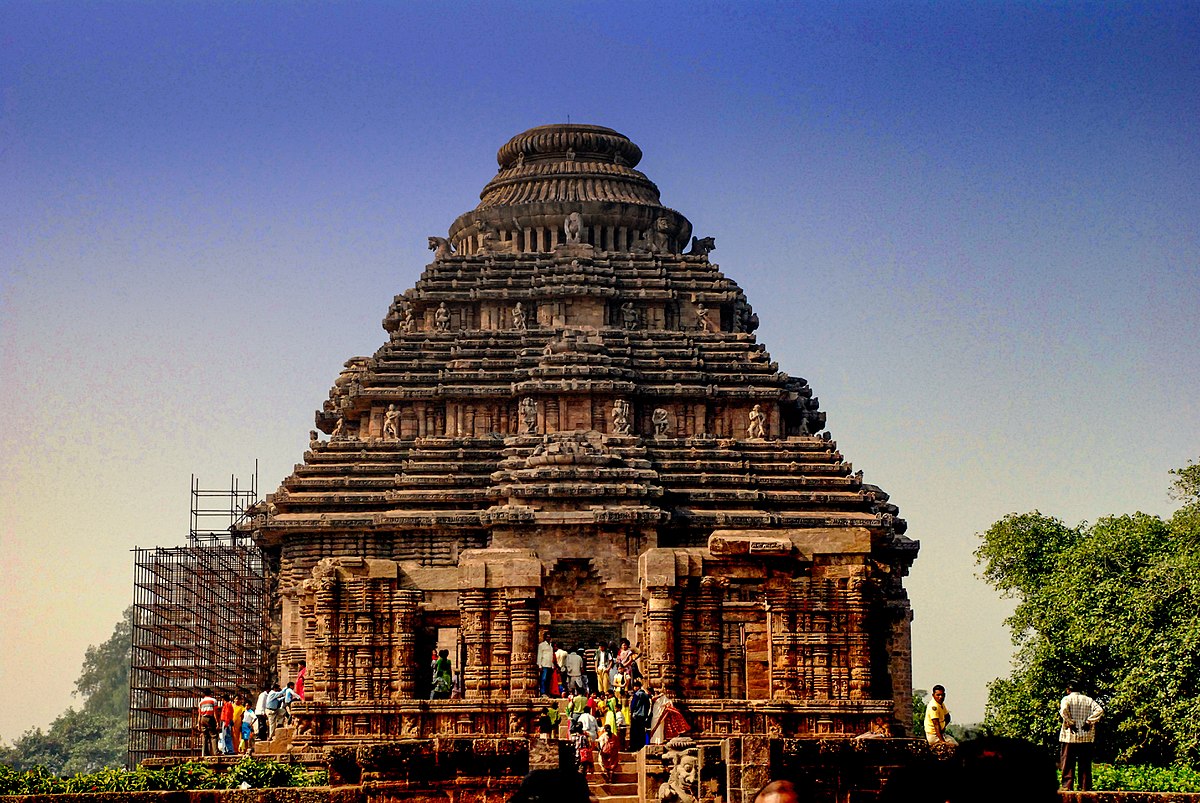 The History Of The Konark Sun Temple

Konark’s Sun Temple is a UNESCO World Heritage Site and one of India’s most known tourist temples today.

It is quite unique to build an entire temple in the form of a beautiful, adorned chariot. But in Odisha, the Sun Temple at Konark is far from ordinary.

The Konark Sun Temple is situated in 35 kilometres, north-east of the coastal region of Puri, representing the pinnacle of Kalinga architectural style and
and one of the remarkable works of traditional design anywhere on the planet.

The Sun Temple, as its name indicates is dedicated to the Hindu Sun God, Surya, in the form of his glorious chariot, and was built in the 13th Century CE by King Narasimha Deva I of the Eastern Ganga Dynasty. The temple has 12 pairs of finely carved, giant wheels made from Khondalite stone, and is pulled by seven galloping horses.

The temple is about 100 feet in height and it is only half its initial size, as beautiful and majestic as it looks. The most remarkable aspect of the shrine, however, is its exquisite reliefs that occupy every empty spot, which includes illustrations of men and women, mythical characters, and animal carvings, and portray hunting, royal ceremonies, and military activities. The endless engravings, combined, add an atmosphere of euphoria to the temple.

The orders for the construction of the Sun Temple at Konark in 1244 was issued by Narasimha Deva I of the Eastern Ganga dynasty, who ruled from 1236 to 1287 CE.
While Samantaraya Mahapatra was the one responsible for its construction, the temple was commissioned by the king. ‘Konark’ means the four corners and the sun.

Since ancient times, Konark has been recognized as the domicile of the Sun God. Konark is referred to as names such as Surya Kshetra in the Shiva Purana.

It is widely believed that ‘Konark’ is a combination of two different terms, ‘Kona’ (corner or angle) and ‘arka’ (sun), possibly because of its geographical location as the location where the ‘sun rises at an angle.’ A tale that says that Lord Shiva himself idolized the sun here in an attempt to atone for his sins is what makes this place much more holy.

Although several other texts mention Konark as being an important sun worshipped site in India, there is one on this site that contains a tale about the ‘first Sun Temple.’ In the Samba Purana, an ancient text dedicated to the Sun God, Surya, this temple is mentioned, and in its initial chapters, it tells the tale of Lord Krishna’s son Samba.

The temple was dubbed the Black Pagoda, which the Europeans used it for navigation for their ships accredited to its eerie exterior.
It is said that because of its magnetic powers, the temple could draw ships to the shore.

Samba established a Sun Temple in Konark in the 19th century BCE, according to this tale, after his 12-year-long sun worship at Maitreyavana (former name of Konark) healed him of the curse of leprosy. The tale is said to be the origin of the tradition of sun worship in Konark.

Between the 7th and 13th centuries CE, temple-building in Odisha reached its pinnacle. The practice of worshipping the sun yet again flourished during the reign of the Eastern Ganga Dynasty (5th to 15th Century CE), especially at Konark.

The temple is famous for its remarkable Kalinga architecture, which includes a depiction of horses and wheels carved out of a single stone pulling a 100 foot high chariot. The statue shows the magnificent chariot of the God of the Sun.

The original temple, constructed of Khondalite rocks, had a 230 ft. high sanctum that no longer stands, a 128 ft. high assembly hall, dance hall, and dining hall which still remains. There are 24 exquisitely designed wheels, 12 ft. in diameter, pulled by horses.

Those 7 horses signify a week, the wheels represent the 12 months, while the eight spokes in the wheels symbolize the day-cycle. And then this entire representation reveals how the sun governs time, just being the example of the Surya in the Hindu mythology in his chariot accompanied by his charioteer, Aruna, moving from the east.

The entrance leads to the temple made of chlorite stone of the Deity of Surya. Elegant carvings of various characters, including Hindu deities, portraits of everyday mortal life, birds, animals, and much more, embellish the walls of the temple with statues.

YOU MAY ALSO LIKE: The magnificent ruins of Jaisalmer Fort