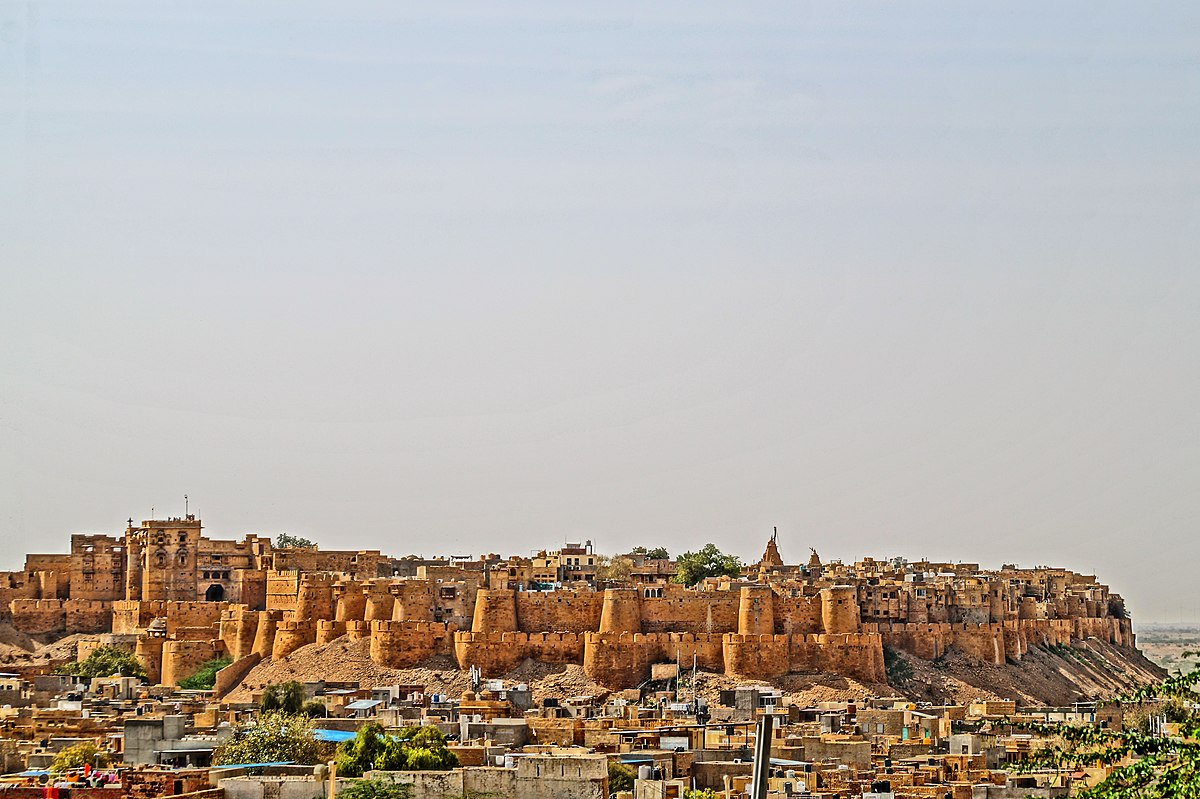 The magnificent ruins of Jaisalmer Fort

In the far northwest region of Rajasthan, India’s desert nation, Jaisalmer Fort preserves a quiet watch. Although the local airport is shut to commercial traffic, almost half a million tourists miraculously find their way each year to the fortress, although it sits dangerously close to the disputed border with Pakistan, India’s long-time adversary.

From Jaipur, the pilgrims follow a 400-mile-long path. They travel through the violent winds of the desert swirling towards Delhi. They encounter 105-degree temperatures in summer. They travel to an area where water has been in low supply for the past 2,000 years. They travel because there is no other place like Jaisalmer on land.

Jaisalmer Fort is also known as Sonar Quilla or Sone ka Quilla (golden fort) and is one of the largest forts in Jaisalmer, Rajasthan, in the world.

During the day, the vast yellow sandstone walls are light yellow and fade to honey-gold as the sun sets, and it is also called the Golden Fort because of the same. This desert beauty has seen many wars while standing in the sandy stretches of the great Thar Desert on Trikuta hill.

Jaisalmer is known as the golden city itself and offers the cultural convergence of the nomadic desert and royalty that will allow you to experience something new.

Jaisalmer Fort’s architectural excellence and other attractions in the golden city are absolutely breathtaking. This UNESCO World Heritage site, built by the Rajput ruler Rawal Jaisal in 1156 AD, is the pride of the Thar desert and a sign of power. In the glorious past until the present, Jaisalmer Fort played a crucial role. It was part of the many fascinating civilizations of the various ruling dynasties.

By preserving the masterpieces and visions, it has maintained the values of the past secure. With its breathtaking elegance, this place will never fail to surprise you and will give you a new vision of the nation’s history, tradition, and culture.

Jaisalmer Fort is said to have established the Golden Fort in around 1156 AD by Raja Rawal Jaisal, who was a Bhatti Rajput king.

In order to point and symbolize the strength and supremacy of the royal Rajputs, he chose the Trikuta hills situated in the great Thar Desert for his fort.

Sonar Quila is recognized as the second oldest fort in Rajasthan and has seen and been part of many historic wars, but even today, when you witness this great building, it has the same beauty and optimistic vibes that will leave you aw-struck. It was also part of the silk trading route from the 16th to the 18th century.

So, the convergence between Islamic and Rajput architecture can be witnessed.

Sonar Quila is a mythical structure and has significant meaning in the history of greatness. The fort has four wide entrances, named Suraj pol, named Ganesh Pol, Akshaya Pol, Suraj Pol, and Hawa Pol, which have their importance, since the first sun rays over the city used to reach this very gate, other gates also have fascinating stories connected to them and are very beautifully carved and built in a way that it is a mix of strength and elegance.

With exquisite compositions and patterns, you would be pleased to see the essence of the Rajasthani architectural touch. The entire fort, constructed of stunning yellow sandstone, has an incredible look and shines like gold as the sun-rays hit on the walls.

This structure moves colour from tawny lion yellow to honey-gold with the glorious sunrise and beautiful sunset. You’ll have fun showing all four of the entrances to the fort. Histories such as Akhai Vilas, the Rang Mahal, Sarvottam Vilas, Gaj Mahal, and the Moti Mahal contribute to their meaning in many other areas.

The Moti Mahal is also referred to as Salam Singh Ki Haweli and is extremely breathtaking with its incredible architecture. It was designed in 1815 with a peacock-shaped roof and numerous balconies that will offer a jaw-dropping view of this location.

YOU ALSO MAY LIKE: The Harappan civilization of Dholavira

By keeping the crafts, patterns, and texture at the priority, these places too have been produced and have been taken utmost care that they stand to display Rajput’s monarchy and energy and take Rajasthani style on another level.