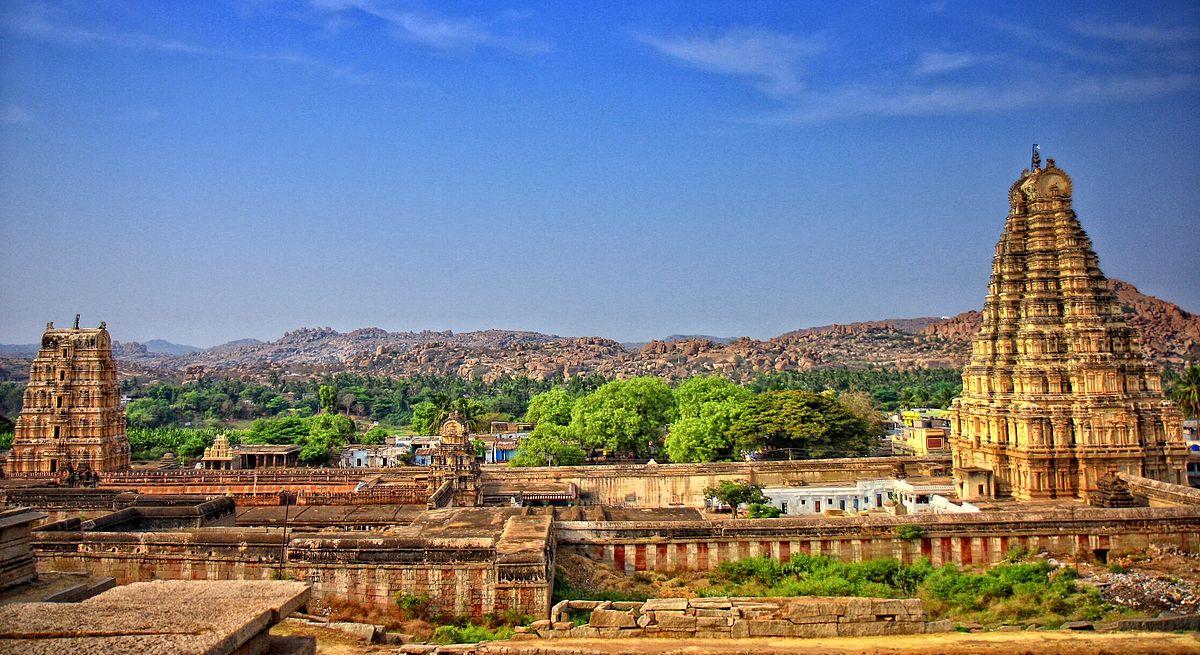 The Engrossing tale of Hampi, a city of incredible wealth

The original capital of the Vijayanagara Empire in India was Hampi. A site of incredible wealth. The apparently invincible palace with seven gates, surrounded by streets filled with gold, rubies, pearls, emeralds, Chinese porcelain and Arabian perfumes.

One of the most culturally prosperous place is Hampi, a village and temple town in Karnataka. Listed as a group of monuments in Hampi under the UNESCO World Heritage Sites, this city had been at some time one of the wealthiest cities in the world when it was at its best.

Hampi, situated within the town of Vijayanagar, was among the most popular tourist destinations. Tourists visit Hampi from all around the world for its magnificent temples and heritage.

Hampi has a popular mythological tales associated with that as well. And if there is anything to go along with these beliefs, the Kishkinda Vanara Kingdom is said to be where Ram and Lakshman stayed when they headed out to search after Sita, who was abducted by Ravana. You can also find some spectacular mountains where Ram, Hanuman, Sugreeva, and Vali stayed.

Hampi was once the most searched places on the internet in Karnataka, as per stats from the year 2014. People visiting Hampi are mainly people who enjoy architecture and history. No wonder Hampi is such a popular destination for visitors from all around the world to explore. At any period of the year, one can Hampi and you can see the place crowding with people.

Hampi has traditionally been referred to as Pampa-kshetra and many other names in different regions.

Hampi has traditionally been referred to as Pampa-kshetra and many other names in different regions.
The term derives from Pampa, in Hindu mythology, another name of the goddess Parvati. Her parents hear and prevent her from her desire, however, she continues to pursue her desire. Shiva eventually marries Parvati after so many hardships. On Hemakuta Hill, Parvati later pursued her austere, yogini lifestyle to win and revert ascetic Shiva to householder living. Shiva was hereafter named as Pampapati.

You will get a peek of the magnificent architectural style of those times as you pass through the ruins of Hampi’s elegant forts, palaces, and gateways. The temples reveal stories about the history of Hampi, which in the 14th century was a wealthy and prosperous kingdom, eventually ruined by the attacks of the Moghuls.

Hampi’s history goes back to the Neolithic and the Chalcolithic period of the 2nd as well as the 3rd century. This reality has been identified from the ceramic potteries from all those decades which have been discovered around.

At one time, Hampi had been one of the world’s largest commercial centers. Vijayanagar provided Hampi a huge amount of wealth, prestige, and grandeur. In those days, the majority of Hampi markets were still crowded and rampaging with customers and traders as well.

Not just Indians, but also people from different regions of the world, were these traders. The market grew enormously in no time and goods were exchanged for spices and cotton. The currencies were silver and gold in ancient times.

In architectural style, Hampi was indeed rich. The kings who ruled the country were great lovers of religion and architecture, and so most of the Kings put so much effort into establishing magnificent kingdoms and use one of the finest architectural designs that you can see now. During the reign of Krishna Deva Raya, who ruled this town between 1509 and 1529, Hampi had reached his pinnacle.

It was the same time when, under the fair trade policies and many international agreements that were carried out, international trade had expanded and reached new heights. The Vijayanagara Empire nearly took up much of South India and even beyond during this era. Hampi, however, succumbed to the attacks of the Deccan Sultans in 1565 and was looted for a long period of about 6 months.

Hampi’s temples were destroyed and most of the markets were looted. It was one of Hampi’s biggest attacks, and with this, their golden era came to an abrupt end. The empire was ruled by several kings after the attacks; however, nobody could really bring recover the lost glory.

YOU MAY ALSO LIKE: Chronicles of Ajanta Caves from the 2nd century BCE to about 480 CE in Maharashtra

The city worked fine, but it had lacked its strategic value. Even till date, in several parts of the city, the loss and deterioration of the 1565 attacks can be seen. Hampi had sparked some interest in the minds of archaeologists from abroad during the colonial era.